Are defensive positions outdated? A new spin on the 4-2-5

The 4-2-5 defense is all the rage in football these days and most teams are relying on a base nickel package to comprise their best 11 players and be effective at defending most everything they'll see from offenses on standard downs.

The golden standard of 4-2-5 defense is the Gary Patterson Horned Frog unit that is designed around principles of versatility, easy adjustment, and division of labor.

TCU is built around playing five DBs all the time but with a defense split into three different units.

-The front six, including two defensive ends, two defensive tackles, and two linebackers who account for the gaps up front in the run game and the RB in coverage.

-The strong safety, free safety, and the strongside corner who all align to the passing strength, usually to the field (wide side of the field).

-The weak safety and weakside corner who align opposite the passing strength, usually to the boundary (short side of the field).

Each unit has their own call with it's own assignments that they carry out and the calls can be made independently of each other by the players on the field. Consequently, TCU can show a lot of versatility despite only having a certain number of 2-deep coverage calls, even bringing a blitz while playing base zone coverage on one side of the field.

The only hang-up is that TCU's system requires a lot of versatility from several of the players to work properly. The boundary corner needs to be a stud who can play run-force on one snap and be in solo coverage on the next one with no safety help. The strong safety needs to be an effective edge player against a lot of different types of offenses, from 4-wide Air Raid passing attacks to Pro-I power run teams. The free safety needs to be a very rangy athlete who can pick up a slot on a vertical route one snap and then be an extra man against the run on the next one.

They all have different assignments they'll be asked to fill and they rely on disguise and versatility to prevent teams from picking on what they're weak at.

But what if a 4-2-5 secondary was defined by assignments rather than positions? What if players could always be put in positions where they were familiar and comfortable with their assignments, techniques, and how to respond when offenses attacked them?

For any high school defensive coaches or Kansas State staff out there reading, this might be an answer for you:


Challenges for the common 4-2-5 defenses

The two most popular coverage schemes in football right now are Cover 6 and Cover 3. Each of these coverages get two overhang players on the edge to force the ball inside while getting three deep pass defenders who are free from run-force responsibilities and thus less vulnerable to play-action.

Cover 6 is a popular choice against the Spread-I formations that are gaining more and more popularity: 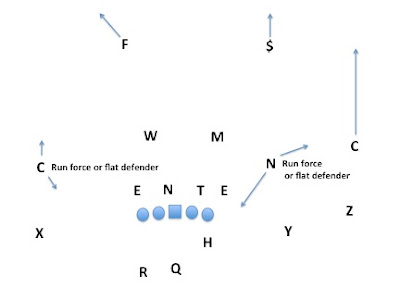 The challenge here is for the strong or field safety, who may have to cover the "Y" slot receiver in wide open space if run blocking by the OL draws in the nickel. That's a tough assignment, akin to play effective coverage with a 10 yard cushion, against a receiver that may run a quick route or run to open grass in the deep field. Both of those are difficult things to cover if the nickel isn't there to help underneath.

The positives include having overhang defenders who can quickly create an 8-man box against the run and help funnel the ball to the safeties who can fill the alley after ensuring that there aren't any deep passing threats on the play. 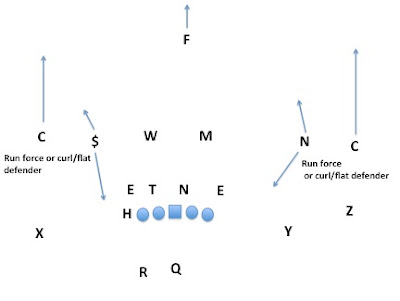 The challenge here is for the overhangs, who need to be good at reading keys and ensuring that the offense doesn't burn them with the H or Y receivers before then forcing the ball inside to the linebackers and free safety.

That deep safety better also be rangy and timely in run support.

This is a little weaker defense for stopping the run, particularly against RPOs (run/pass option plays) that will require the force players to hang back and mind the slot receivers and shallow zones in order to protect the safety before coming down to set the edge. However, it is useful for matching up against the passing game, protects the linebackers, and has great teaching overlap with the fire zone blitzes everyone likes to use.

You'll notice though that in one defense a corner is a force player, which is a challenging position, and in the other base coverage he's a deep pass defender which carries its own rules and techniques for success. The strong safety is similarly either playing as a force player or else a very difficult coverage position.

If you're a smaller high school, or even a college that plays a wide variety of opposing offenses, wouldn't you rather that every defender become a master of a specific skill set rather than vacillating between wildly different assignments?

Part of the problem is that defenses can become slaves to old positional definitions and will routinely base a player's position by where he lines up on the field rather than what he's asked to do.

What if a defense that wanted to base around playing Cover 6 and Cover 3 were to define their five secondary positions by the following assignments:

The force players: In either coverage, the defense will always have two players who are trained full-time to play run-force roles. In either Cover 6 or Cover 3, these players are going to assume the positions that have force responsibilities. In this package the nickel, boundary corner, and strong safety positions will always be manned by a force player when they have run-force responsibilities.

This would have been a relief to many college football teams that experienced horrendous force play from multiple positions in the 2014 season.

The coverage players: There are two positions that typically carry difficult man coverage assignments in the defenses above: either corner spot and the strong safety position. In this scheme, those two most demanding coverage slots will always be filled by the two coverage players.

The deep safety: The heady, range player who is great at making open field tackles or sitting on deep routes is always going to be put in position to do so as the sole true safety on the team. In Cover 6 he's playing as the boundary safety while in Cover 3 he's up top. 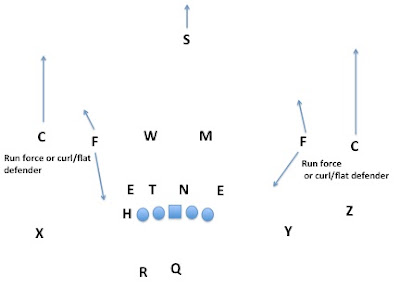 Cover 6 against a 2x1 Spread-I set with 20 personnel 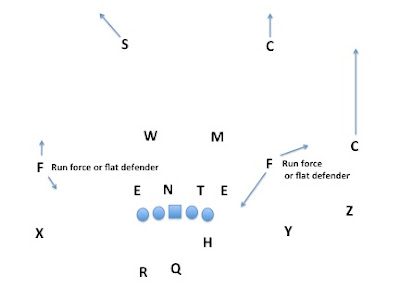 Now the defense always has players in each position on standard downs who have been drilled heavily in their actual assignment. The DC doesn't have to worry about not being able to play a hard cover 2 because he can't find any good coverage corners who are physical enough to set the edge, and in fact he can now choose and develop corners more strictly on coverage ability.

Similarly, he doesn't have to sacrifice coverage ability or tackling at strong safety to do all the things he wants his safety to be able to do as he can now choose players based on their ability to perform as a deep support safety or a force player. Much like the Seahawks with their specialization on defense, this unit could choose players to fit more narrow skill sets.

The focus on training up players to be force players is probably the strongest sell to this system as that position is ever more becoming a focal point for offenses with all of the option, RPOs, and use of skilled slot receivers in the game these days.

With this packaging, the defense always has solid players zoning up underneath with a well-trained deep support player on top of these schemes. It's hard to do much better than that.

Many will respond, "well now the offense can tee off because they know what you're running."
Motion, specific game planning, and lack of disguise could potentially make your defense a sitting duck in this package since the offense will always know your coverage based on where your players are lined up. Or will they?

One simple response to this criticism is the simple fact that Michigan State and Kansas State routinely play pretty good defense without employing a great deal of disguise. If your players are just really good at what they do it doesn't always matter if the offense knows what they're doing they can still be very hard to sustain drives against.

Against motion, this defense is arguably less susceptible since it will always have good force players on either side of the formation and the better coverage players will always be aligned to defend receiver positions that are hard to handle.

The only difficult motions that would be difficult to counteract would be ones that put a top receiver in a #3 or #2 slot, but these are hard for any defense to handle, much less this take on the 4-2-5. It would just require simple adjustments by the linebackers to change their assignment to handle these types of strategies.

Another response is that it'd still be possible to include an aggressive blitzing package with this defense and keep the offense on its toes with pressures.

For instance: In Cover 3 you can give the LBs blitz checks without doing much to affect the overall structure of the plays. For instance with one check, you could have one LB blitz while the other takes the RB and either locks him down in man coverage or joins in the blitz if the RB stays behind to protect: 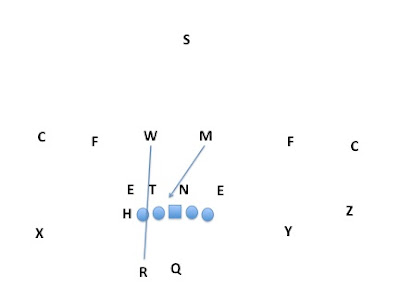 The middle linebacker could blitz based on tendency or weakness in the offense or else as a part of a stunt with the rest of the DL. Behind him, you've got force players still lined up over the slot receivers with a deep safety sitting in the middle and you have your best coverage players outside on the WRs.

If one of the LBs is a great pass-rusher and can threaten to bring this pressure regularly then the offense will have fewer options for attacking the defense.

Another check option that would be especially useful in Cover 6 would be to do the exact same thing with the force players, send them off the edge with wide contain responsibility and pick up the receiver in man coverage with the coverage player or safety behind them: 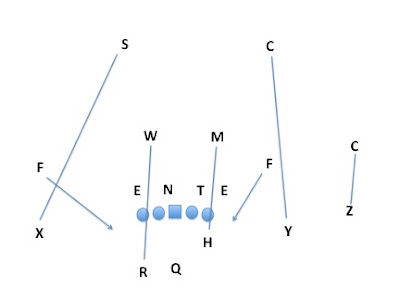 The nature of the defense would make simple Fire Zones and a whole myriad of man-blitzes very easy to dial up without exposing the defense to any great match-up problems.

So while the offensive coach or QB may have a good idea of which base defense he's looking at, he doesn't necessarily know if he's facing a blitz or not and no matter what he knows he'll still struggle to find a match-up to attack either with the run or the pass.

The game of football is changing and up-tempo strategies combined with RPOs and more precise passing attacks are changing the way defense is played. More and more the focus for defensive coaches has to be on consistently getting players in positions where they can succeed and teaching them how to organize and conduct themselves on the field so they can withstand up-tempo attacks and think for themselves on the fly.

By moving on beyond old positional designations and turning players into specialists who are technique masters and armed with pressures they can call to adjust on the field, perhaps defense can make a leap forward with modern offenses.
Posted by Unknown at 11:08 AM No comments: