Bill Snyder throws the kitchen sink at the Big 12

As a coach who likes to oversee a vigorous and efficiency-based ball control offense, Bill Snyder loves to work with senior quarterbacks.

In 2012 the Wildcats had an offense built around senior QB Collin Klein's talents that went 11-2 while winning the Big 12 title. In 2014 they had completely re-worked the offense around Jake Waters who went 9-4 and fell just short of helping Snyder capture another league crown in the vacuum left by Texas and Oklahoma's failures.

In 2015 the Wildcats are going to have to completely rework their system and they're going to need to do it around a different talent than either Klein or Waters. The leading candidate to be the man is redshirt freshman Jesse Ertz, a former 3-star recruit from Iowa who lacked offers from either of the state schools there. Typical Wildcat.

With leading skill players Tyler Lockett (106 catches, 1515 yards, 11 TDs) and Curry Sexton (79 catches, 1059 yards, 5 TDs) also gone the K-State offense will necessarily have to look much different in 2015. The Big 12 looks pretty tough in the coming year, but there can always be opportunity for K-State to do better than expected if they are well positioned to take advantages of opportunities that come up in the season.

How might their staff build a new offense that could put them in position to seize advantage if injuries or failures occur elsewhere in the league?


Let's start by just looking at how Snyder-ball was adapted to make the most of the Waters-Lockett-Sexton triumvirate that headed up the Wildcat machine in 2014. Their statistical profile is of a team that could run the ball with a measure of effectiveness when they needed to but really made their money throwing the ball and particularly with Waters scrambling and either finding an open receiver or taking off and picking up yardage: 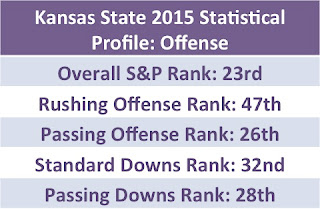 One option was with heavy formations that could threaten a defensive front's ability to get enough numbers to stop the run. Here's a fun example: 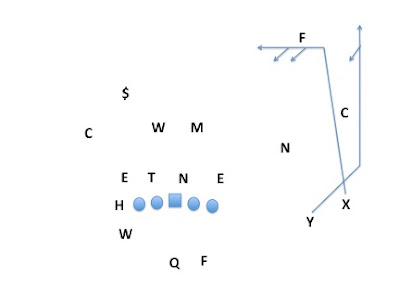 Since the QB run game is a major part of the K-State package, even with a smaller guy like Waters in the game, Snyder and his staff would load the box with a TE and a pair of fullbacks to threaten the defense with the possibility of a single-wing type running play where the QB runs behind eight blockers.

How are you going to stop that, even with an eight man front? By loading the box in response.

But now the defense is serving the real goal, which is to try and create space for the receivers. The diagram above is a route combo that Sexton and Lockett would run a lot in 2014 and it basically amounts to them running downfield and looking for open grass. With all the extra blockers on the field, especially when they would play Gronk at running back like I've depicted here, and Waters' quickness the Wildcats were often able to buy their QB and WRs time to get open and connect down the field.

Snyder would also go with spread sets to accomplish the same goal: 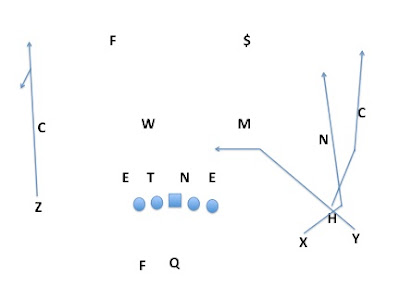 Stuff like this, a bunch set with three receivers stacked to one far end of the field is the kind of thing K-State loved to use to get a free release for their receivers and a chance for Lockett or another WR to find themselves in open grass.

The goal is always to do what it takes to get the best players in position to do damage. Many coaches today go for a very simple, system-based approach with self-contained answers and constraints but the Wildcat offense is much more extensive and geared around having tons of ways to stress and attack opponents.

They have a spread passing game, pro-style concepts, and single-wing running plays all available to them to basically hit their opponents with their best players in as many ways as possible.

Jesse Ertz and the Wildcat assets in 2015

In determining what kind of offense K-State will have in 2015 the first most important question to answer is "who is the QB and what can he do?"

If Jesse Ertz is the man, what is his skill set? In high school, Ertz operated a spread offense which appears to have been absolute voodoo to his Iowa opponents.

A 6'3" 190 pound athlete throwing to receivers who know what they are doing, and can catch, is generally going to do pretty impressive things in a spread offense at the high school level. The big question is whether he's just a solid system QB or someone with elite skills that will translate to the Big 12 where defenses are developed and groomed to stop spread systems.

Based on his film, very little about Ertz stands out except that he's quite decent at just about everything. He can get the ball out quickly and on time, his accuracy is good, arm strength is solid, he can throw on the run, and he is fairly quick and built thick enough to take a few hits.

If he's smart and hard working in the offseason, and quick thinking on the field, there's reason to believe he could handle a very extensive chunk of the K-State offensive package. But he also doesn't have any particular skills that opponents will worry about.

He can operate the spread passing game, presumably with time he can make the checks and calls at the line to get the Wildcats in the optimal plays, and he can run the ball in the single-wing sets so Ertz might be the ideal man to operate an extensive K-State offense built around a strong supporting cast...so who's the supporting cast in 2015?

Up front the OL returns a wealth of experience, save for the center who incidentally makes all the line calls and is the brain trust of the group. They seem to be trying to get Risner up to speed there which is as sure a sign as any that they think he's one of the more talented and intelligent players on their roster. They groomed and played BJ Finney early before him. 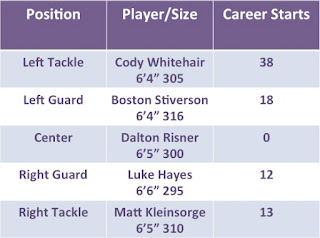 This is a group that is solid in run-blocking despite the negative press they got for their performance last year. The design of the run schemes is to limit penetration and use angles created from a diverse playbook to help the players out. When they need help in pass protection Snyder will just bring in tight ends, fullbacks, and running backs to help them out and you'd better believe all those players know how to perform in those roles before they are allowed on the field. There isn't a ton of punch in this group but they aren't bad either.

At RB the Wildcats have a three-headed Cerberus led by returning starter Charles Jones, who was solid in 2014 while playing hurt much of the year, hard-running walk-on Justin Silmon, and ultra-quick redshirt freshman Dalvin Warmack who was lauded as potentially being the next Darren Sproles (by myself and others) when he was recruited.

Depending on how much more explosive Jones is when healthy, what you have here again is a group that can do a lot of different things but may not be dominant at anything.

The ancillaries include fullback Glenn Gronkowski, who's very versatile, emerging fullback Winston Dimel, and a cast of tight ends who will doubtlessly be solid blockers and average running routes.

Rising senior Kody Cook said this WR corps could be as good as last year, at least as a group, which is frankly hard to believe. With Cook, Stanton Weber, and Kyle Klein they have the typical cast of white dudes with solid hands that know what they are doing. Deantre Burton has plus speed and good size (6'2" 205) that could make him dangerous on the outside and perhaps the most intriguing player on the roster is redshirt freshman Dominique Heath.

At 5'9" 175 and blazing fast, he's on the Tyler Lockett development plan. They'll use him running underneath in 2015 or on special teams and hope that his athleticism and hands become dominant after a few years of instruction on running routes. In the meantime, he'll probably be a useful but limited part of the toolbox.

They all seem useful, but it's not clear that opposing defenses will feel the need to bracket any of them.

The Wildcats also have some very explosive running QBs in freshman Alex Delton and JUCO sophomore Jonathan Banks that could figure in to the single-wing/QB run schemes much like Daniel Thomas and Daniel Sams did in the past.

Everywhere you look on the K-State offensive roster you see competence, quality, and versatility but nothing truly exceptional.

In the past, Snyder's offense has basically been a "bellcow" offense, meaning that the team has one great player who is milked dry of value and production. I've tabled the bellcows who have summed up Bill Snyder's 2nd reign as King of Manhattan: 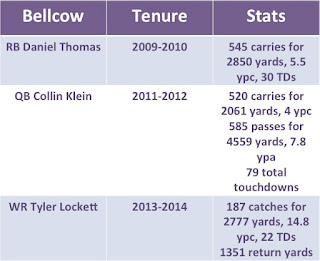 As K-State beat writer Derek Smith noted, "This is kind of a unique situation for this Snyder Era. Not sure he's had an offense like this since his early years. If Snyder/Dimel can engineer a competent offense this season, it'll be something entirely different than what we've gotten used to over the last six years."

If Snyder doesn't have a feature of his own team to emphasize that leaves one other thing for him to focus on...your weaknesses. And he's going to throw everything at you, even the kitchen sink.

The expectation for the 2015 K-State offense should be that they'll be extremely multiple, very disciplined, and that they'll have exacting game plans with all kinds of stuff designed to milk every drop of value from their young cows by allowing them to pasture where ever it is that you least want to see them.

Will that be enough for them to be bowl eligible? Win eight games? Contend for the league crown?

Let's just pencil them in for 7-5 and see what happens.
Posted by Unknown at 6:18 PM