The tight end position in a spread offenses has always been a tricky but potentially devastating dynamic to the system. When a spread system has a tight end that can block on the edge or go out for routes it puts the defense in an impossible bind as they determine how to match-up or what schemes to play.

Within a spread construct teams will also use a TE in the backfield as an H-back, essentially like a fullback, to create blocking angles and lead escorts for their ballcarriers, and as a flex player blocking or abusing DBs on the perimeter.

There's really no better foundational piece for a spread offense than a tight end who demands attention in the middle of the field AND lends credible aid to the run game.

Of course, this player is a total rarity. Even at the pro level the tight ends who are match-up nightmares in the passing game are rarely also great blockers. Go to a power run game oriented program like Minnesota and you'll still see their featured weapon, Maxx Williams, being spared from executing the more difficult blocks in their scheme.

As I've written over at Inside Texas concerning the 2015 Texas tight ends, there are basically three types of tight ends in the modern game. I'm going to go into further detail here to talk about each kind and the types of concept where they boost an offense.


This is the traditional use of the role and requires a player who can line up in an attached, in-line spot and block on the edge. This player is generally long (6'3" or better) and heavy (240+) enough to grapple with defensive ends. This is very challenging since the TE doesn't get any momentum or often even a favorable angle to help him out and because the defensive end is often one of the best athletes on the field at projecting explosive power in a short distance and time frame.

A really great single-back TE who can grapple with an end is invaluable on zone schemes for allowing the offense to single-block a DE with him and thus allow the OL to double team the defensive tackles on tight zone: 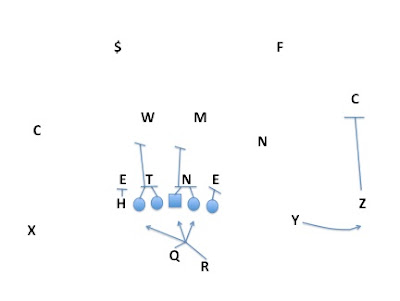 Or he can help them to dominate the edge on wide zone by helping the tackle reach the end before advancing to take out the linebacker or safety that gets there first. 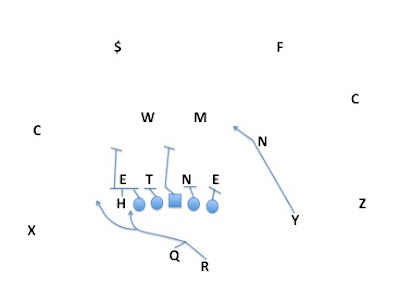 I've drawn both examples with pass options attached of the sort that teams often use to punish teams for trying to involve the nickel in run support underneath.

On the tight zone run the offense is typically looking to hit the cutback lane, so most teams like to use the bubble screen to force the nickel to stay wide and be unable to fill that gap.

On wide zone run the X receiver can block the most dangerous secondary player on the edge so offenses will often use that Y receiver to run into the area of the field that the middle linebacker has to vacate while racing to beat the reach blocks by the OL.

A tight end who can be trusted to go war with a good defensive end like this is usually not an exceptional receiver, and some spread teams will have TEs that they put on the field for these instances when they want to be able to run the ball while sacrificing this position as major tool for attacking the middle of the field in the passing game.

If he is a great receiver, then he is invaluable to a spread offense for running any number of routes to the middle of the field and requiring defensive attention. From the 2x2 set we have above the tight end could cause damage on vertical concepts like the smash route against teams that tried to cover the deep weakside zone with a safety: 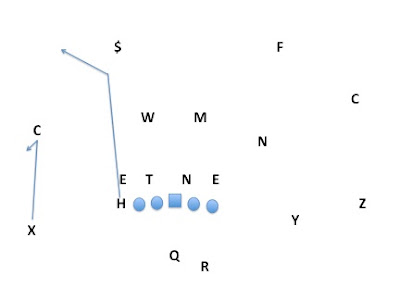 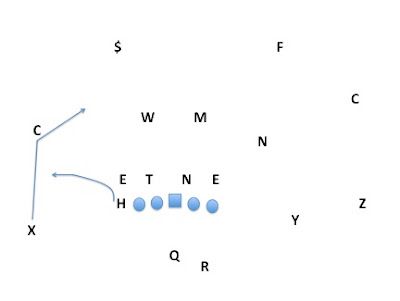 Just between those two concepts the offense can attack a wide variety of defensive coverages. If the defense plays their strong safety down tight to help stop the run then he'd better be able to flip his hips and run with the TE on the smash route.

If they want to play with the safety deep, how effective is the weakside linebacker going to be at getting over to help close the window for the slant on the "dragon" concept?

There's really nothing better than a great, dual-threat tight end.


Teams often do have success in transforming a big high school wide receiver or tight end into a weapon in the passing game at the college level, but teaching them all the routes that a good TE needs to master to be a weapon in the middle of the field often means that his development as a blocker is neglected.

Additionally, guys who excel at getting open in space aren't always built for war in the trenches either physically or mentally even if they are good at being tough-minded at taking blows after they catch the ball.

Many spread teams with a big TE that is a match-up nightmare in the passing game but not a dynamic blocker will then ask, "why ask him to get his hands dirty or put him in position where he can get chipped by a defensive end? Why not send him out wide to run routes or block for WRs?"

This player then helps the run game either by requiring the defense to send numbers to stop the bubble screen, or in the manner that a slot receiver would help the offense, by running routes in the seams that distract linebackers and cause them to vacate the box.

Here's an example of a flex TE wreaking havoc in the screen game: 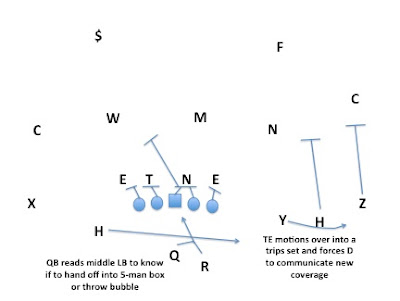 And here's a flex TE doing work in wide open spaces, who's going to cover him on a timing route like this? Will the middle linebacker get over? Can the nickel avoid getting boxed out by a bigger player? 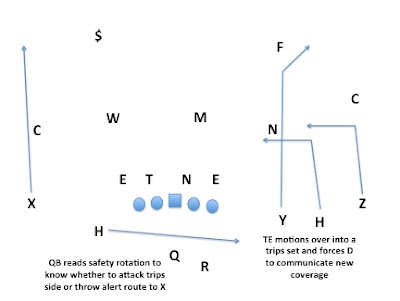 A TE that is a difficult assignment for a defensive back or linebacker is bad enough but when he's flexed out in such a way that he can motion around and force the defense into non-ideal coverages then he becomes lethal.

An experiment for the Madden fans out there:

Pick a team with a great receiving tight end and then line up in formations where he's on the field in a normal alignment, then audible into four or five WR sets and see if you can get him lined up outside running a deep route on a linebacker, safety, or tiny corner. That was fun, wasn't it?

Now imagine this tactic being utilized at the college level.


Usually if teams have a 6'5" 250 pound tight end that can block they'll stick him along the line of scrimmage to help brutalize defensive ends. However, for teams that rely on gap schemes or who have tight ends that are smaller in size (maybe 6'2" 240) they aren't going to get as much bang for their buck by using their main ancillary blocker in that way. 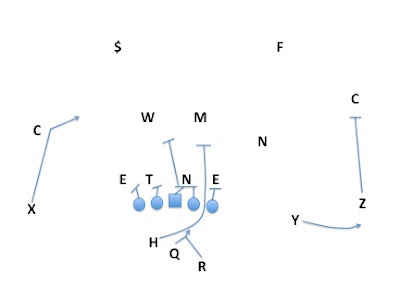 In a gap scheme he's perfectly positioned to get a running start to execute the kick-out block on a defensive end, a very difficult block for an in-line TE to attempt, and allow the guard to lead the running back up main street: 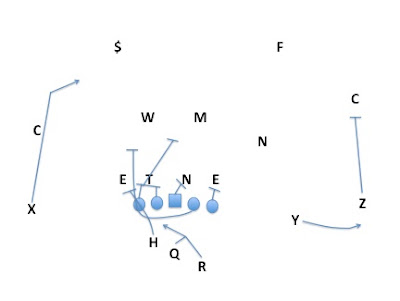 The consequence here is that from his H-back position behind the OL this player isn't able to run vertical route stems and is relegated to running flat routes and serving as a check down option unless he's motioned out wide as a flex TE.

He can still be useful there, such as on this popular modern bootleg play that plays off the way in which teams will regularly have the H-back work across the formation to block the defensive end or arc around and pick off the linebacker: 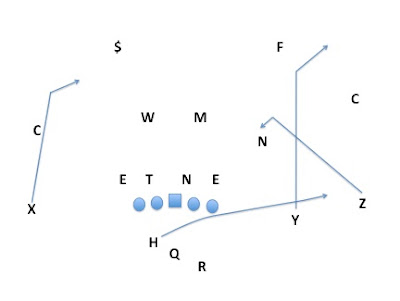 Instead of executing one of those normal run game tasks he turns and stretches the defense out to the flat and serves the offense as an option for easy yardage if the defense doesn't get anyone out to cover him or pulls defenders wide and short and allows a receiver to get open.

The offense can also still run concepts like "dragon" on the backside with the H-back running wide to the flat to create a window for the QB to fire the slant route: 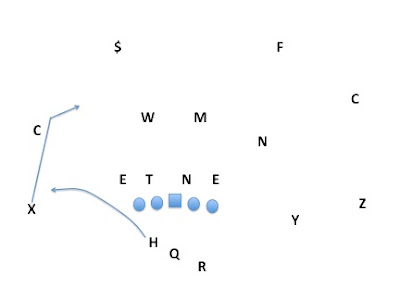 The H-back is a major boon to a spread team's run game by allowing them to target different parts of the line of scrimmage while still putting three receivers on the field. More importantly, he's much easier to find than either the 6'5" 260 pound freak who can dominate a DE on one play and then beat a linebacker in coverage the next. He's also easier to find than the 6'4" 230 pound match-up nightmare that can flex out all over the field and run past big people or bully smaller ones out wide as a receiver.

Many Big 12 teams are now content if they can find a good blocker to serve as an H-back and are thrilled if he can do anything else. In our next post we'll talk about a Big 12 team that had such modest ambitions and ended up with a treasure trove in their tight end meeting room.
Posted by Unknown at 2:02 PM