The Briles "veer and shoot" vs other smashmouth/power spread Os

@Ian_A_Boyd Can you do a couple paragraphs on your blog on Briles offense vs Clemson/UH style power-spread?
— Ryan Dewey (@t_ryandewey) March 22, 2016

I like to use the term "smashmouth spread" for any spread offense that is oriented around Power-O runs and play-action passing. Originally "the spread offense" was associated with quick passing attacks that turned shifty white dudes bigger schools didn't want into dangerous weapons.

Although the approach of using 3-5 WR formations to run West Coast concepts found success, and is now common to many of the bigger programs, the knock on these teams was always that they were "soft" and couldn't run the ball or impose their will in an inherently violent game. It was often a fair charge.

The smashmouth spread offenses looked to reverse that problem and run the ball into the space afforded by using 3-5 WR formations. In particular, these teams like to do it with two-back runs like power and iso. 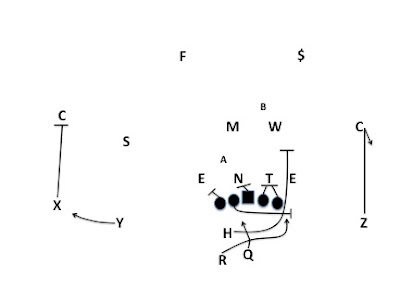 Points A and B represent spaces where the defense needs to be able to insert an extra defender to keep the play covered up. They need one to make sure that the cutback lane left vacant by the pulling guard isn't open but they also need someone to fill behind the weakside linebacker after he takes on the lead block from the H-back here.

Either that space-backer or one of the safeties is going to have to get involved, and when that happens the offense can run play-action and attack the now out-leveraged coverage with deep shots.

That's the smashmouth spread in a nutshell.

Briles takes all of this a few steps further. He uses wider splits then anyone else, he looks to field the biggest, fiercest OL possible, he uses as much tempo as the rules and his players' fitness will allow, and he lives to take the kill shots.

At the end of the day, even many of the "smashmouth spread" coaches want to control the ball and run it down your throat methodically, they just believe that the best way to do this is from spread formations.

The veer and shoot coaches of the Art Briles tree don't want to control the ball they want to isolate all of your weak spots and then hit them over and over again mercilessly. Many coaches are looking to set up the deep ball for the right opportunity, to veer and shoot coaches every play where they can get a favorable match-up to throw a deep ball to is the right opportunity. 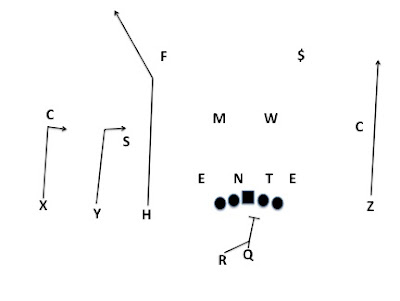 They'll have whichever slot receiver has the best match-up go deep while everyone else just holds their defender and then that deep route will just run into open grass against an out-leveraged safety and the QB will throw it up to them. They practice to make these as high-percentage as possible and they take them early and often with multiple different concepts.

The extreme spacing and stresses of the veer and shoot often make it so that the coaches and QBs go into a game knowing which receiver will be open and they'll go ahead and stare them down without fear, knowing that the spacing and leverage will do the work and all they have to do is throw a good ball and it's six points.

Dealing with the extreme stresses they put on you can become simplified by their cheats but only if you can be sure to always have favorable match-ups both in the box and out wide...at the same time...on every opposing skill player.

If not, that's where the ball is going. That's how this offense works and how it's different than the broader realm of smashmouth spread systems.

Put another way: Smashmouth spread teams are various tribes of plains Indians, the veer and shoot folk are the Comanche.