Did Kansas State blow it against TCU?

Kansas State had a chance to do something special last Saturday night in Manhattan against top-5 ranked TCU and they blew it by failing to just "run the dang ball," or at least so goes the common narrative about the game.

Facing 4th and 1, down 45-42 with 1:52 on the clock, and choosing to kick a field goal has generally been labelled as the decisive point when a failure to run the ball cost Kansas State the game.

But let's back-up from that moment and talk about what K-State needed to do in order to have a chance to win this game:

1. They needed to keep TCU's offense off the field and out of rhythm.

TCU has arguably the most explosive offense in the Big 12, or at least the most explosive roster, as Doctson, Green, Boykin, and Turpin are threats to score every time they touch the ball. If allowed to have multiple possessions and opportunities they were eventually going to make plays against a K-State defense that has a big hole on the field with Dante Barnett hurt and added more holes when Morgan Burns and Danzel McDaniel were unable to play.

So, K-State needed to control time of possession and have some good, long drives.

They were actually successful here to an extent. They held the ball for 39:45 of game clock, aided no doubt by the fact that TCU scored quickly multiple times, but they also converted 8-14 3rd downs, which is the way to maintain drives and wear down an opponent.

The problem came in the 2nd half when K-State's first four drives failed to score points (for KSU at least) or use up even two minutes of clock.

You can't efficiently move the ball down the field if you can't hammer a sore spot over and over again. Then when you do so, you eventually can blow them away. In this game, the opposite happened.

What has to be noted here is that attacking TCU's tiny linebackers is trickier than you might assume. Ideally you want to require them to beat blocks, make fills, and do things that are hard for 200 pound, inexperienced, converted DBs to do.

However, first you have to deal with the Frog DL and secondly you have to control the three other 200 pounders (the safeties) and prevent them from allowing the LBs to play with decisiveness and have numbers advantages.

Ideally, you handle the first issue with double teams and effective blocking from the front and the second issue with a passing game that requires conservative safety play.

Execution by K-State in the 1st half


The simplest way to attack the linebackers without getting ripped by the safeties is with the QB run game, which K-State happens to have:

This is QB Power with the next Braden Wilson (Winston Dimel) at fullback and an offensive set (11 personnel, one back and one TE) that puts extreme stress on the defense. Do you want to send numbers to stop the passing strength of the trips receivers or to stop the running strength?

TCU played a corner-over version of their base two-deep defense against this set but the problem here was that they were still outnumbered at the point of attack because the QB is the runner and everyone else is a blocker or away from the point of attack.

By the end of the first half Hubener had already carried the ball nearly 20 times and he finished the game with 26 carries, which is about as many as you want your QB to get in a given game.

The next issue is how to attack the linebackers with the running backs and how to do so without inviting the safeties into the action?

There are two ways that could have been approached by K-State. One would have been to go with big formations, which TCU usually responds to by bringing their weak and free safety Ridwan Issahaku and Derrick Kindred closer to the action.

The other option was to spread out the Frogs and make strong safety Denzel Johnson or one of the two green linebackers responsible for balancing run/pass conflicts. That's the option K-State chose for this game.

Kansas State's two backs Charles Johnson and Justin Silmon combined for 97 yards on 19 carries, or 5.1 yards per carry. In the first half those runs looked something like this:

That's an inside zone run with five blockers for five defenders and the 6th player accounted for with a QB read of an unblocked end or of an outside linebacker with a pass option (RPO).

With few exceptions, K-State's OL struggled to execute the combo block throughout the game against TCU's DL. Since the Wildcats don't have the most talented line in the country they like to focus on controlling DL with their double teams and then using variety, speed, and option to control the linebackers and prevent them from taking advantage of the extra time they get.

The Wildcat OL are always hesitant to come off the double team if there's a risk of giving up a negative play. The problem is that this often prevented them from reaching the TCU linebackers and keeping them from being able to make the play. In the clip above they were able to make a positive gain but they couldn't block Chris Bradley out of the play with a single block from Hayes and also couldn't blow him off the line of scrimmage with the Risner double team before TCU LB Wilson arrived.

Nevertheless, this kind of steady gain would have made it much easier for the Wildcats to maintain their lead in the second half rather than being forced to punt over and over again.

Frog counters in the 2nd half

K-State had eight RB carries for 54 yards in the first half, good for 6.8 per pop. However, four of those carries went for two yards or less (none were negative). In the second half, they managed only 42 yards on 11 carries at 3.8 yards per carry with one negative run (-4 yards) four more that were for one yard or less.

The QB run game, which K-State was probably hesitant to rely on too heavily given their depth situation and how many carries Hubener had already received, also struggled in the 2nd half:


Several key differences in how TCU played the scheme this time. One is that they basically played man coverage on the trips side which cost them having strong safety Denzel Johnson in the action but gained them Derrick Kindred filling the alley. Another is that K-State ran it to Kleinsorge's side this time rather than Whitehair's, which means a rather serious blocking downgrade. Finally, the backside linebacker was scraping hard to get there and couldn't be reached.

Now check out TCU's defense of a zone run with big personnel on the field:

As I explained initially, and as K-State had to know in their game-planning earlier in the week, that kind of scheme was going to invite TCU to play the run aggressively with numbers. Especially if they were playing from behind.

You'll also notice that TCU's LB Wilson is either filling super-aggressively or else run-blitzing, which prevents K-State's double team to effectively control the DL.

Now a K-State zone spread run in the 2nd half:

K-State audibled to a run here but then strong safety Denzel Johnson snuck into the box after the audible and late before the snap. What's more, K-State's interior OL couldn't drive the Frog DTs off the ball, so it was simply a matter of Jones either trying to cut into the back-side B-gap and beat Wilson's tackle or trying to get around the DTs (iffy proposition) and into the play-side B-gap without getting tackled for a loss by an unblocked Johnson.

At the end of the day, K-State was never going to be able to clear room for their running game without connecting in the passing game and punishing the Frogs for either dropping the deep safeties into the box with throws outside or punishing the down safeties and linebackers with throws to the slot receivers.

To that purpose, Joe Hubener went 13-33 with 157 yards and a pick-6...which may have occurred as a result of Kindred knocking Reuters over before the ball arrived but the point remains that KSU wasn't efficient in the passing game.

So where do we lay the blame for the Wildcats' failure to pull off the upset? 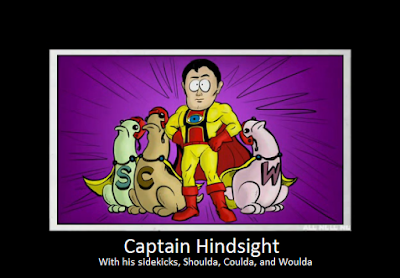 When K-State was facing 4th and 1 with 1:52 on the clock, or when they were facing 3rd and 3 on the previous drive while up 42-37, they didn't have great options for running the ball on the Frogs that could guarantee a high rate of likely success. Why?

You could say it was because they hadn't established the passing game in a manner that could guarantee that TCU's safeties at least thought about that threat before flying at the line of scrimmage, but this isn't really true.

Gary Patterson and TCU know they're in the wild, wild west and they don't play by the rules. They were going to attack the line of scrimmage aggressively in those situations no matter what. K-State's failure to execute in the passing game prevented them from blowing open the game and avoiding those situations but it wasn't necessarily relevant to their failures in those specific instances.

You could also say that they failed to run the ball enough to run clock and test the Frogs' mettle. This is probably true, but the failing was more in their Tuesday game-planning to find ways to attack TCU with their RBs or in their failing to put winning this game above the risk of losing their QB.

The real problem though is that TCU couldn't trust their OL to win the point of attack against the Frog DL and they lack either the needed depth at QB or passing acumen to punish the Frogs' aggression. Facing that 4th and 1, K-State was always going to chose the conservative option and making their opponent prove he could take the game.

You can say that K-State blew it against TCU and you'd have plenty of evidence for your claim, but the team came within three points of beating a more talented opponent with a rather weak QB and a disadvantage in the trenches. The coaches could have been more clever but "Why didn't you out-smart Patterson more often?" seems a rather blunted criticism to offer in light of the whole game.

I would have called more pulling plays to move the point of attack, but I suspect K-State had reasons for running more inside zone and without a better passing game it's probably a moot point.

I would have gone for it on 4th and 1. When you're the underdog you have to be aggressive and take chances at times to come out ahead. Snyder went conservative and lost, but Snyder almost always goes conservative so at this point, you know what you're getting. Second-guessing the Purple Wizard seems silly and I don't think you can question their game planning or in-game decisions at key moments without second-guessing the old man.

Complaining about being overly conservative is too complain about the foundation of K-State football.

Were I a K-State fan, and I almost count as one, I think I'd shrug my shoulders and hope for better next time or hope or hope for a better QB in the future so these games don't come down to 50-50 decisions.
Posted by iain_boyd at 12:27 PM