Sizing up Baylor and Kansas State

Since I don't support gambling in the first place and have been humiliated trying to pick B12 games against the spread, I figured this week we'd just talk about what a few different teams in the league have shown thus far into conference play.


Phil Bennett is seizing advantage of the fact that his defense is returning nine starters from last year by diversifying the coverages that they're playing on the back end. New nickelback Travon Blanchard doesn't seem to have that much more trust than did Collin Brence when it comes to carrying vertical routes regularly so the Bears have started mixing in two alternative coverages to protect him from getting targeted by opponents.

One is a classic tampa-2 that drops mike-backer Grant Campbell down the seam and the other is a trips coverage called "solo" that proves that much of the Baylor defense is simply stolen from Michigan State. 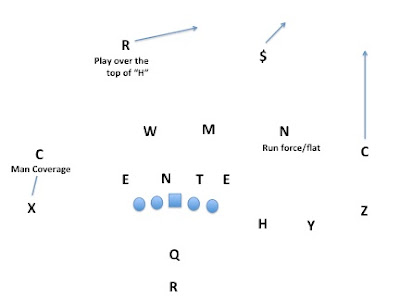 The Bears did some of this in 2014 but it seems to be more their preference in 2015, perhaps in particular with Burt out and Chance Waz replacing him at field safety. With "solo" they can roll veteran Orion Stewart over to help out while also playing Blanchard closer to the action. The weakside is exposed somewhat but that's where they play "Rocket" so NBD.

Grant Cambpell is a definite downgrade from Bryce Hager but with Taylor Young back and a very strong DL in front it hasn't really mattered much yet for Baylor. It'll be interesting to see how their team looks in 2016 after they lose Oakman but there should still be some pieces in place to play pretty good defense.

The offense is just steamrolling people and it's because no one they've faced is remotely capable of combating their run game without sending numbers nor defending their WRs without having help over the top. You have to pick one or the other or else have some serious range from your safeties.

I think the team that will give Baylor the most trouble in 2015 will be either one that plays them away from Waco (duh!) or one that has safeties with enough range to play over the top of the vertical passing game but still make tackles that prevent Linwood and the run game from destroying them. The Briles' may get impatient, or their young QB might, and throw a pick trying to force the action.

Also noteworthy is that Seth Russell is an effective runner, but that also means that he has an internal clock that goes off rather quickly instructing him to run rather than to throw deep. It'd be better if he could use his legs to buy time and throw downfield as RG3 used to do in this offense rather than pulling it down as often as he does.

On the other hand, it's a fantastic option on RPOs where he realizes the throw is risky but doesn't want to double clutch for fear of drawing a penalty for having blockers downfield. I might break my rule and watch just a tad of their game against Kansas to see what Stidham brings to the table....lol, no I won't.

We'll learn a lot more about this team when they face West Virginia at home, Iowa State at home, and then travel to Manhattan to play...


The Wildcats are having some trouble on defense without All-B12 strong safety Dante Barnett (out with injury). Like the Bears, the Wildcats are taking advantage of having so much experience in their secondary (Barnett's replacement is redshirt senior Nate Jackson) to run a greater variety of coverages this year than you sometimes see from them.

In addition to their preference for quarters and for the "special" trips adjustment that doesn't roll coverage, the Wildcats are also playing some "solo," lots of cover 3, and some single-high safety blitzes which they find more appealing with Elijah Lee in their LB corps.

Despite coming into prominence thanks to his pass-rushing, Lee serves as the "coverage" linebacker in KSU's 4-2-5 defense while Will Davis remains as the "inside" linebacker who aligns based on which position is more likely to have to fill gaps quickly in the run game.

This alignment has worked well for them as it often gives Lee a chance to be an eraser pursuing the ball in space and cleaning up plays before they result in scores, which is essential in KSU's "bend don't break" strategy for defense. He's currently their leading tackler, followed by "Cat" safety Donnie Starks (their nickel position), free safety Kaleb Prewett, and then inside linebacker Will Davis.

The main problem is that Starks is so high in tackles, and it's not because he's the perfect replacement for three-year starter Randall Evans, it's because opposing teams are finding it too easy to throw to the field and find yardage.

This is one of the strongest fronts the Wildcats have had in some time but they're not getting the full value out of it because opponents can move the chains with the passing game. The DE rotation of Jordan Willis, Marquel Bryant, and Tanner Wood already have three tackles for loss and 7.5 sacks on the year while the tackle tandem of Will Geary and Travis Britz has another three tackles for loss and 3.5 sacks.

Nate Jackson isn't able to enforce the middle of the field like Barnett could if healthy while Starks is vulnerable down the field in coverage and they're having to play a lot of off-coverage everywhere with some players that aren't excelling in it.

They're still a tough defense because Morgan Burns is a good man corner, Danzel McDaniel is still a physical eraser, and because the front is so good. But Kaleb Prewett is still learning on the job (he'll be very good eventually, possibly a star in 2016) and the Jackson-Starks combo against the opponent's passing strength is a sieve against better throwing teams like Oklahoma State. Starks vs David Glidden went terribly for K-State.

When Barnett comes back, this defense will make a leap and be really nasty, much like they were in 2014 before Travis Green went down and they had to bring Schellenberg back at free safety.

Meanwhile the Wildcat offense is trucking along and seeing some players emerge that are better than expected...much like every other season in the Snyder era. The preseason hyperbole about this being a great WR corps may actually be true and it's because Heath and Burton are great athletes and because Kyle Klein is somehow a brilliant receiver.

The dude just knows how to get open, he's quick in and out of breaks and he's a massive target at 6'4" 210. They need Heath to be healthy as he makes a lot of their concepts much more effective by being a threat running flat routes and crossers but this WR corps is very competent and capable across the board.

Also hilarious and typical is that walk-on Justin Silmon is a good running back. He could probably start or get significant snaps for multiple teams in the Big 12, perhaps including Texas, and he's great at making cuts and getting the most out of runs with his wiggle and willingness to run through tackles.

They like to use him on a tackle lead play similar to some stuff Baylor has run in recent years: 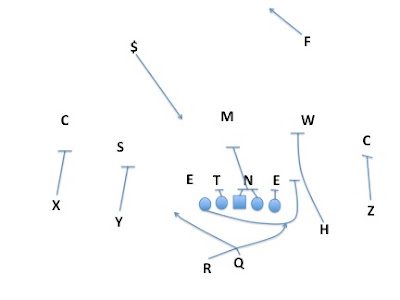 The Wildcats have a few varieties of this play, in this example they ran it as a QB option play with the backside defensive end unblocked against a cover 3 buzz call from OSU. They can also run it as an RPO although Hubener has proven to be inaccurate on RPOs this season.

K-State has a huge collection of running schemes in their playbook but the nice thing about this one is that if they run it to the right they can use left tackle Cody Whitehair as the pulling lead blocker, and Whitehair is probably going to be a multi-year pro in the NFL as a pulling guard.

The "kitchen sink" offense is starting to find its legs thanks to the overall competency of the K-State offensive roster and the confidence they've built up beating the little sisters of the poor in their pre-conference schedule. They'll probably play spoiler for some contender or another, perhaps even TCU this weekend in Manhattan...but probably not.

Their QB run game, which they used to great effect when Kody Cook came in against OSU, is a nightmare for a team like TCU that just doesn't have big bodies to survive a pounding over the course of the game. Unfortunately for the Wildcats, they're very thin right now at QB due to injuries. It''ll take a herculean effort for their defense to hold off Boykin and the Frogs from lighting up the scoreboard and forcing Snyder to throw the ball. These things have happened before in Manhattan, but it's a tough assignment.
Posted by Unknown at 11:27 AM