The importance of the running game in the wild, wild west

It was another fascinating weekend in the wild, wild west (Big 12) as Texas pulled off a major upset over #10 ranked Oklahoma, probably eliminating them from playoff contention, while K-State almost did the same to #2 ranked TCU.

In either instance it would have been an example of a defense+run game (heavily utilizing the QB) overcoming an explosive passing team, but the traditionalists could only manage to go 1-1 on the day.

Even though Texas Tech was never quite able to win the Big 12, the success Leach had in the 2000's with his Air Raid spread passing offense really changed the league forever and that system and its philosophy now rules the day in this league.

Because modern development programs for young players is so intense and thorough it's becoming possible for passing games to become precise enough to attack defenses and execute game plans that used to be impossible for college teams to attempt.

New England's last Super Bowl victory was the warning bell that running the ball at a high level may no longer be essential to playing dominant football. However, the prevalence of teams built around the QB and passing game is more common to the NFL where they have the time to master an intricate passing attack and the field layout doesn't work against them.

But then you watch Bob Stitt's Montana offense execute a passing game at an extraordinarily high level with players that wouldn't be given a chance anywhere in the Big 12 (save for maybe at Kansas State) and you realize...this is eventually coming to the college game as well.

The main reason? With a spread passing game you have a larger margin of error.

When you can chuck the ball around effectively you can either scores lots of points early, build a lead and force your opponent to play catch up while playing your style of game, or else you can languish for a few quarters but then come alive and catch up to your opponent very quickly.

How many times have you seen a spread team get down big in the first half only to win the game by multiple possessions after getting going in the second half?

But all that said, spread passing teams at the college level need to interact with the run game and they need to have the following relationship with the run game in order to take on all comers and win championships:

First, they need to be able to control the run


You don't have to totally stuff the run, but you can't let the opponent control the game with the run, gash you, and put points on the board by running the ball. Spread passing teams can overcome giving up rushing yardage and losing the time of possession battle but they can't survive a team that can run the ball well enough to score.

TCU is going to get themselves eliminated from the playoffs at some point, probably before the selection, because they can't control the run. Now it's not really their fault, they're just all beat up on defense and forced to play undersized, inexperienced kids at linebacker and weak safety. When these kids are beefed up upperclassmen they'll be stuffing teams but for now, they're exceptionally vulnerable.

Spread passing teams that can't stop the run struggle to find rhythm on offense, can't as easily turn the game into an up and down shootout where their own efficiency in scoring quickly and late can dictate the outcome, and get set up to get blown away late as their defense loses their legs to exhaustion while the other defense stays rested and doesn't exhaust their blitzes and disguises.

Finesse offense may be finding a greater place at the table in football but you still can't be soft in this game.

Second, they need to be able to run situationally


How many spread teams have you seen that can't convert when they get into short-yardage situations? They stall out in the red zone, or blow it in key short-yardage scenarios, or can't slow down their pace and speed up the clock to protect a lead in the fourth quarter and prevent their opponent from catching up.

Spread passing teams virtually always rely on tempo, upon OL that are built and developed for pass protection, and on skill players that can catch the ball and score. They generally don't have a bunch of really good TEs or FBs to help them run out the clock late in the game, or even if they do their OL or team simply isn't very good at executing these strategies.

The best proposed solution I've seen for this problem comes from Coach Joe Willis of Colleyville Heritage (formerly Cedar Park) and is based around building a "4th phase" unit, in addition to your offense, defense, and special teams.

The 4th phase takes the field in "winning time" situations, like 3rd and 1, on the goal line, or in four-minute offense modes trying to protect a lead. It'll consist largely of offensive players but the goal is to get the best and most physical players on your team on the field when you really need to just go out there and impose your will on the opponent.

Third, they need to be able to run on a five-man box

In that wonderful North Dakota State vs Montana game, Bob Stitt's Grizzlies were almost done in by this defensive scheme from the Bison: 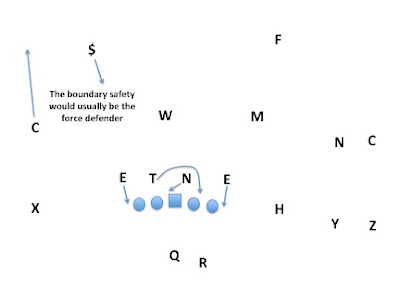 Stitt really wants to throw the ball on every defense, but when you get a five-man box like this with safeties aligned over the top of either side of the field and well-trained defenders aligned to take away easy slants and quick game routes it becomes very difficult to efficiently operate a spread passing game.

The Grizzlies' only real run game solutions to this were an inside draw and a zone play that would get five blockers on five defenders and allow the RB to choose his crease. The problem was that with this nose-tackle twist the Bison were tying up the interior OL with their nose tackle (sometimes tying up all three blockers with him) and either causing the RB to cutback into the gap that the tackle was stunting into or else creating a pile-up that allowed the strong safety and middle linebacker to reach the play despite aligning deep and wide to stop the pass.

The Bison settled on this as their primary solution midway through the game and stymied the Montana offense for much of the contest when deploying it.

This kind of strategy often causes a struggle for spread teams that spend most of their practice reps mastering timing routes and adjustments but then face a defense that can out-scheme or out-talent them between the tackles because they themselves lack the versatility or physicality to always be able to run the ball on an undermanned front.

If you have a dangerous running QB you can usually just count on this being the odd game where he has to get 10-20 carries but most spread passing teams don't have a mobile QB and they can't rely on having one every year that can also execute their intricate passing attacks.

The spread passing game is going to continue to dominate the Big 12, and it should, but only the teams that can maintain enough balance in their approach to the run game will be tough enough to come out of the gunfight alive.
Posted by Unknown at 5:18 AM