Twitter-bag! Answering questions on the Big 12

Twitter-bag should probably be an insult used to describe the types of jerks who use Twitter to find people to troll, start pedantic arguments, and generally dish out hate across the interwebs. Until that term catches on though, I'm going to use it to describe what I'm doing here.

I'm going to post questions from folks on Twitter about the Big 12. If you have a question you'd like me to answer in the future keep 'em coming and I'll store them up for usage in the next Twitter-bag post. The advantage here is that I can answer detailed questions with long-winded and diagram-assisted prose whereas on Twitter, 140 characters and all that.


@Ian_A_Boyd thoughts on Will Johnson coming in for OU over Bryd.
— Payton Guthrie (@PaytonGlen) October 18, 2015

While I didn't watch OU vs K-State (who would other than fans with A&M-Bama and Sparty-Michigan on?) I liked Will Johnson's JUCO tape at cornerback and I've noticed that OU seems to prefer a 3-3-5 approach on defense with Devante Bond injured rather than their 3-4.

When they do this, they get Steven Parker at the nickel, which leaves them with a pair of run-support safeties and a potential coverage weakness, especially when they bring nickel blitzes or play cover 4, either of which ask a safety to play man coverage on vertical routes.

If I were the Sooners, I'd consider bringing the better coverage player on the field in nickel as well. What's interesting though is that K-State's passing game isn't very good so it's curious that they felt they needed Johnson out there over Hatari Byrd for the purpose of stopping Joe Hubener or Kody Cook on QB Power. But they pitched a shutout so...who's gonna argue?

Also noteworthy, getting Will Johnson safety reps will be INVALUABLE for the Baylor game later in the year when OU will want to have four good coverage players on the field in the secondary to allow them to attempt to play man coverage against the Bears. In that game, choosing Johnson over Byrd will make all the sense in the world.

If I can risk making an assumption without looking like an ass, I'd say that the question at the heart of this question is whether Baylor has the SOS to reach the playoffs if they finish the year as a one-loss team.

I'm on record as saying that I don't think the Big 12 will have a playoff team but Baylor's success and the lack of dominant teams nationally are starting to change my mind. The big questions are whether Seth Russell will perform well on the road (and not just against TCU) and if the Horned Frogs can continue to turn Boykin + Patterson defensive wizardry into victories.

Neither of those questions have obvious answers.

I believe that Baylor has demonstrated that their offense is as potent this year as most any other year in recent memory and that their defense is at least as solid as last year, though Billing's health is a big question.

The potency of the Baylor offense can often be summed up by...well, let's continue this with our next question and sum up by saying:

Beating West Virginia is a quality win and Baylor should get into the playoffs, even with one loss, provided that loss doesn't come against the Horned Frogs. I think losing at OSU but winning the other three games in the OU, @OSU, @TCU, UT gauntlet at the end of the year would do the trick for Briles and prevent him from having to hire a crappy marketing firm again to help make the case.


A former Big 12 defensive coach put it to me like this: "How unstoppable Baylor is in a given year really depends on how many 'aliens' they have in their WR corps."

By aliens he meant "guys that you can't cover in man-to-man coverage." He noted that in 2011 Baylor had four such players with Kendall Wright, Terrence Williams, Tevin Reese, and Lanear Sampson. Every year after that they had fewer and fewer, until now when they have two (in my estimation) in Corey Coleman and K.D. Cannon.

The most important key to stopping Baylor's offense is to stop their vertical passing game, or else you'll be buried in an avalanche of points. But of course, their offense is engineered around forcing you to make impossible choices, like how do you stop a vertical passing game that is tied to the run game with play-action and RPOs (run/pass option plays)?

The Baylor RBs are good but not terrifying, but it's hard to keep a lid on both Cannon and Coleman and still have enough numbers in the box to stop the Bears' veteran OL from blasting open giant holes for said RBs.

If I were in charge of game-planning this Bear team I'd try and do the following:

-Press Coleman at the line of scrimmage and play a safety over the top of him.

-Put my best coverage player on Cannon with strict "just don't get beat deep!" instructions and no safety help.

-Devote as many remaining players as possible to stopping the run.

-Regularly bring disguised pressure, and when doing so, bring a LOT of pressure and play press coverage against both Coleman and Cannon. Your goal here is to rattle Russell, create negative plays against the run game, and force Baylor to beat you with precision under pressure.

I have a few ideas of how this could work...but scheming the Baylor offense is just about the most challenging problem the modern game has to offer. It's just simple geometry, their spacing and competencies all play off each other. It's hard to do without either having NFL players on your defense or Baylor having a dearth of "aliens."

I'd say those three factors all played a role, as did the game being in Waco rather than Morgantown. Baylor is nearly impossible to beat in "the Thunderdome" these days but are also a team that is frequently vulnerable playing on the road and Morgantown is a hostile atmosphere, perhaps the most hostile in the league.

The biggest difference was that last year, Petty was looking to Goodley over and over again and the Mountaineers made that a very inefficient proposition. While Goodley had big numbers in that game (nine catches for 123 yards), I'd guess that the Bears had several more incomplete passes that came when he was targeted by Petty, who had poor numbers on the day.

Last year West Virginia played a ton of man coverage against the Bears while mixing in some deep, max zones that had someone over and under Goodley. That couldn't work against formations like this: 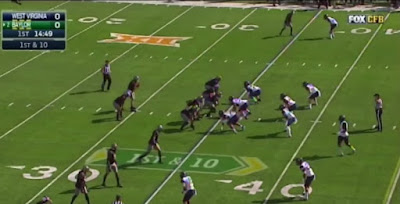 That's Coleman up top facing press coveraeg with no one else within 15 yards of him.

This is like dumping the ball to LeBron James in the post while he's surrounded by three-point shooters. They're isolating Coleman on Worley and the big WV corner couldn't handle it. None of them could. 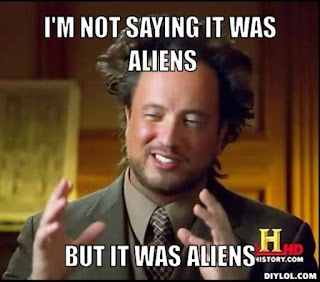 Okay one final one and we're done for today:


@Ian_A_Boyd Do you think Big 12 teams are baiting KSU into checking out of run plays and into pass plays with their pre-snap looks?
— Tye_KC (@Tye_KC) October 19, 2015

TCU definitely did this, I would do this if I were a Big 12 DC, I didn't watch the Oklahoma-KSU game but that move is still within the Stoops' brothers grasp...at least so long as they aren't in the Cotton Bowl.

The Frogs would do it by showing a look, waiting for the audible, and then sneaking SS Denzel Johnson (usually) into the box late before the snap. You can see them doing it in the last clip I put up in last week's "did K-State blow it against TCU?" post here.

Not every defense is crafty enough to pull this off but when opposing teams can dictate that you have to throw the ball but you are wildly inefficient doing so...you have big problems.

The Wildcats are going to have to battle hard to reach 6-6 and bowl eligibility, but that's not the major issue for this team. Their problem is that they need to find an answer at QB as they are currently without a clear plan at the position for the first time since before Collin Klein took over.

The 2013 Wildcats went 6-6 but it wasn't a big deal because they had Jake Waters and a plan to build a strong 2014 offense around him. Snyder isn't going to want to build the 2016 offense around Joe Hubener but who really knows what they have in Jesse Ertz and who knows if Banks or Delton will be up for taking over either? Should be interesting to see how this develops.

That's all, feel free to send more questions and I'll get to them later this week or next Monday.
Posted by iain_boyd at 8:15 AM